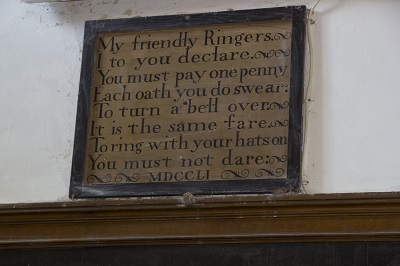 There are six bells at Bredgar, the heaviest (known as the tenor) weighing 9cwt 2qtrs 6lbs and tuned to the key of G. (Weights of bells are still recorded in imperial measurements, but for younger people our tenor weighs 485kg!)

After an extensive fund-raising campaign by the Vicar of the time, Revd. Stanley Evans (seen in the picture below), the existing bells were installed in 1967, replacing the old ring of five. The metal of the old tenor was used to cast two smaller bells, which are the present treble (lightest bell) and number two. 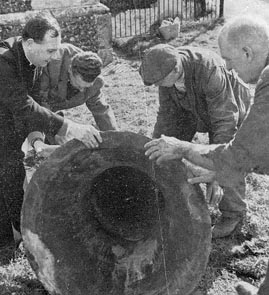 Rev. Stanley Evans (left) helping to move one of the old bells

A keen local band practises on Wednesday evenings and also ring for Sunday morning services. Close links are maintained with other ringers in the Benefice, particularly those at Frinsted and Wormshill. 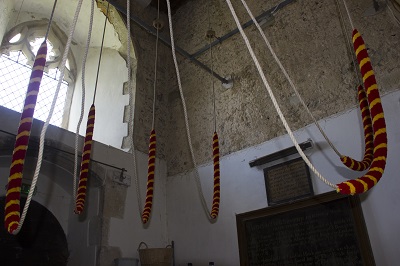 From 2014 to 2018 we rang the bells to mark the 100th anniversary of the falling of each of the Bredgar men lost in WWI. The full list is shown here.

On 11th November, 2018, we joined with ringers around the country in celebrating the end of WWI by ringing at 12:30.

A Half peal to commemorate Rev. Stanley Evans was rung on 21st December, 2019.