Welcome to St John the Baptist, Tunstall Church. Although a church is not mentioned here in the Doomsday survey there is good reason to believe that there was one in Saxon days. Tunstall church is dedicated to St. John the Baptist, and old records show that in medieval days there were lights, possibly altars, to St. Margaret of Antioch (who was martyred in 278), and to St. Osyth who with her husband Suthred King of East Anglia was killed by the Danes in 870. The oldest part of the present building is the Chancel which was rebuilt in about 1250. The Nave was rebuilt in about 1350 and the North and South aisles were then added, also the tower and a south porch. The South Chancel Chapel was added in the early 15th Century and extended to its present size by 1655. 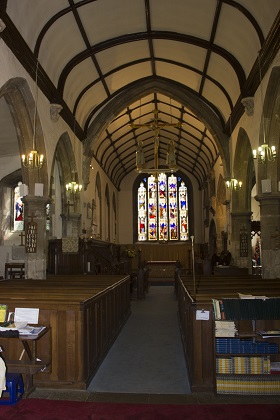 By the Early 19th Century the fabric was in need of extensive restoration and this was undertaken for the Rector, the Revd. G. Bridges Moore, by the architect Mr. Hussey, during the years 1848 to 1856. In the 1930s, the Hales or Lady Chapel South of the Chancel was restored after many years use as a vestry. In the last twenty-five years the century-old organ has been replaced, the bells recast, considerable work done on the fabric, and an extension built which contains meeting room/choir vestry and other much needed facilities.